Baxter County became the 68th county in Arkansas on March 24, 1873, with the small village of Mountain Home as the County Seat. The County was created from parts of Fulton, Izard, Marion, and Searcy counties and was named for the Governor of Arkansas at that time, Elisha (Elizah) Baxter. The community of Mountain Home, situated on a high plateau between the North Fork and White Rivers, was first settled in the 1850s with a post office established as early as 1857 (the name was drawn from the plantation house built by Colonel O.L. Dodd at the future site of Mountain Home - first called Rapp's Barren - to which his slaves allegedly referred as "my sweet mountain home" whenever discussing the mountain setting vs. the site of Colonel Dodd's other plantation, down the White River at Augusta). The restored historical village of the Rapps Barren Settlement can be visited today at Cooper Park on Spring Street in Mountain Home.

According to the Arkansas Historic Preservation Program, the town grew up around the Mountain Home Male and Female Academy, opened in 1853 by Professor J.S. Howard, a minister and schoolmaster from Wisconsin. The Academy, like many other contemporaneous schools in the Ozarks, filled a need for education that was accessible to the mountain children in the face of a frequent lack of established public education. Parents from many miles away, as well as those that lived locally, frequently sent their children to board with residents or to stay with family in the community where the school was located. However, the success and local significance of the Academy had little impact upon the bushwhackers that virtually leveled the town during the Civil War, including the first buildings constructed for the Academy. The town re-built in the years thereafter, but was still a relatively small town and unincorporated as of 1873, when Baxter County was established. Court was first held in the name of Baxter County on July 7, 1873 at the Casey Store, located on the grounds of the Casey House, at the entrance of today's Baxter County Fairgrounds. The county paid Mr. Casey $7.00 per month to use his store for a courtroom and a place to conduct county business. There was no jail and reliable citizens were paid $10.00 per month for finding, keeping and guarding prisoners and for taking care of their horses.

In 1874, the county purchased a boarding house on Main Street of the ever-growing town of Mountain Home for use as a courthouse. They paid the owner $600.00. In 1876, a jailhouse was built on a nearby rock ledge for just over one thousand dollars. To keep dangerous prisoners from escaping, they were chained to heavy rings embedded in the rock ledge.

In 1882, the former boarding house was deemed an unfit place to conduct county business. The entire building fund was allotted to build a new courthouse on a lot donated by merchant J.S. Russell. For the first time, the courthouse was located in the middle of the Town Square. This wooden frame building burned in 1890 and many of the beautiful, handwritten records were lost, but not all. Some, with pages scorched and brown, can still be examined with care in the County Clerk's Office. 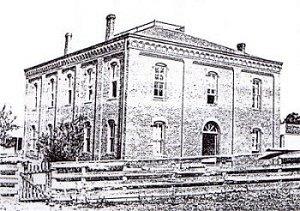 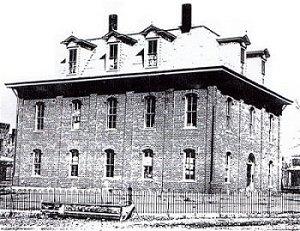 In 1890 a new, two-story brick, gothic-style Courthouse was built in the middle of the square. The cost was $4,200. It was surrounded by a fence to keep visitors to town from riding their horses up the steps and into the courthouse. Running water came to the courthouse in 1904 when a windmill was erected on the courthouse lawn.

In 1912, a third story was added to the top of the courthouse because Arkansas Law states that a county seat cannot be moved from a three-story building. The railroad town of Cotter had about three times the population of Mountain Home, so a drive had begun to move the courthouse to Cotter.

In 1937, when plans were being made to build a new courthouse, Cotter once again tried to get the courthouse moved there. While the brick building was being demolished, the courthouse was moved to the county warehouse on the square. This was during the building of the Norfork Dam and the town of Ellis was located near the dam site. Officials there tried without success to move the county seat to Ellis. The town of Ellis has since faded from existence. 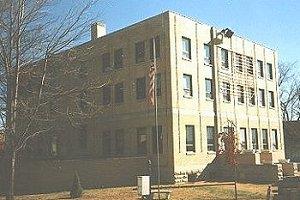 In the spring of 1939 County Judge R. M. Ruthaven determined the original Baxter County Courthouse building to be inadequate for the needs of the county and structurally unsafe as well. The architectural firm of T. Ewing Shelton of Fayetteville was employed to draft plans for a new courthouse, and a special county election was held on October 28, 1939 to allow the citizens to vote on the construction of a new courthouse. The courthouse was approved by the voters, and despite a suit filed by the residents of Gassville and Cotter contesting the election, plans for construction continued. In November of 1940, the new courthouse was approved by state officials as a Works Program Administration (WPA) project. In January of 1941 County Judge Jim Martin determined that the new courthouse would be built on the site of the original courthouse. The old building was razed in August, 1941, and construction on the new structure began that fall. The week of August 13, 1943, the new courthouse was unveiled.


The WPA was involved in public construction projects throughout Arkansas during the 1930s and early 1940s. This national organization that hired unemployed men and women to work on a variety of public projects throughout the nation was one of many federal programs established by President Franklin Delano Roosevelt and his administration in response to the dire economic circumstances brought upon the American people by the Great Depression.

Through its many projects in the area, the WPA had a major impact on the growth and development of Baxter County. The minimalist design of the Baxter County Courthouse and the use of local materials in its construction are features common to many depression-era public works projects. Therefore the court house reflects the history of the WPA in Arkansas and Baxter County and it is listed on the National Register of Historic Places.

At one time, all of the county offices were located in the courthouse, with space left over to rent out to lawyers and abstract companies. The Health Department was located in the basement and the jail was located on the top floor. Prisoners would hang out between the bars and try to make dates with the girls walking around the square on Saturday afternoon. The first county library was started in the little room above the courtroom, now used as a deliberation room for jury members. Many of the county offices and related business places are now located outside of the courthouse, but the Courthouse Square remains the heart and soul of Baxter County.

The National Register of Historic Places is the country's official list of historically significant sites worthy of preservation. Authorized under the National Historic Preservation Act of 1966, the National Register is part of a national program to coordinate and support public and private efforts to identify, evaluate, and protect our historic and archaeological resources. In Arkansas, the National Register is administered by the Arkansas Historic Preservation Program (AHPP), which is the agency of the Department of Arkansas Heritage that is headed by the State Historic Preservation Officer. Baxter County has eleven structures listed on the National Register of Historic Places as of 2002 including the Baxter County Courthouse, according to the Arkansas Historic Preservation Program. They include: The North Fork Bridge in Norfork. The steel-deck Warren-truss bridge was built in 1927 and takes Highway Five over the White River. The Cotter Bridge, US Hwy. 62 over the White River, is a 1930 Marsh rainbow-arch bridge. The Cotter Bridge is a National Historic Civil Engineering Landmark. The Jacob Wolf House on Highway five in Norfork, a two-story, dog-trot log home which was built c. 1829 as a court house for then Izard County and is oldest known standing structure in the state. The Casey House, a c. 1858 dog-trot structure, located at the Fairgrounds in Mountain Home. Case-Shiras-Dearmore House, located on 4th Street in Mountain Home, is a 1880 Plain Traditional style home linked to prominent local families, including Tom Shiras who, with his brother, built the Baxter Bulletin into the principal news source and editorial voice for the entire north-central region of the state in the first part of the 20th Century. The Davis House in Norfork, located on the SE corner of Wolf Street and Highway Five, is a 1928 pyramid-roof cottage. The Buford School Building on Highway 126 in Buford is a 1936 Works Progress Administration (WPA)-built educational structure. The Old Cotter High School Gymnasium, a 1936-38 structure built by Works Progress Administration, is located on Powell Street in Cotter. The Big Flat School Gymnasium, on County Road 121, South of Highway 17, is a 1938 structure built by National Youth Administration. The Old Joe Site is a c. 1500 rock art site, location restricted. 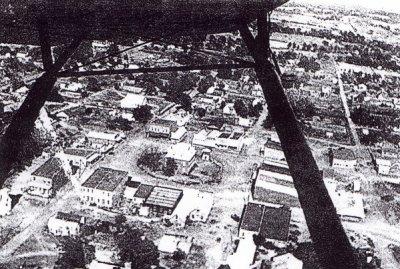 Site Designed and Maintained By The County IT Department
Contact Us